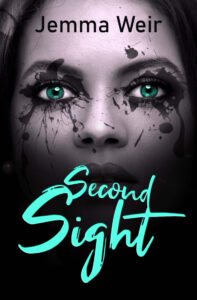 One Sight in exchange for another

Terra’s world is thrown into darkness and the only thing she can see is a death she fears she cannot stop.

To have any hope of preventing what’s coming, Terra must learn to stop fighting her past and embrace her gift, but as Seers start dying, is she already too late?

“You can’t deny who you are forever,” Terra’s mother said. She sat by the window, the afternoon sun highlighting the bright turquoise of her eyes. They never once moved to look at Terra, even though after all these years blind, her mother was more than capable of pinning Terra with a look.

Terra took a deep breath, pushing down the answer she wanted to give. This was an argument she’d had with her mother more than once.

Terra dragged her eyes away, trying to focus on anything else. The Edinburgh townhouse that her mother lived in had all-white walls. They were a sterile reminder of the utilitarian choices here; why put in colour when her mother couldn’t see it anyway? White walls, pale-cream carpets, practical, comfortable furniture that only matched because of her manager, Malcolm, helping her order it. No photos, no trinkets. What was the point?

Even though Terra no longer lived here, it still made her chest tight with anger. Terra had been living here when it had been decorated; she could see it, it had mattered to her. God, she hated white.

“I will not become you.” The words burst from her. Her mother said nothing, did nothing. But then, that was her usual response. As if by ignoring Terra’s anger, it would make it go away.

Her mother had long since picked her visions, and loyalty to the Coalition of Seers, over her family. Terra never wanted that to be her life. When the ability to see the future passed to her, she vowed it would be different. She would not forget her children and would not abandon them.

“I know that you cannot understand now,” her mother said, reaching down to touch her guide dog Iksha’s head. The black lab sat at her feet content, happy, “one day, you will have my ability, you will get to choose how you help people with what you see. You will know the cost of seeing a death and trying to prevent it.”

“Did you see that in a vision too?” Terra said, failing to keep the bitterness out of her voice. She could almost taste it, like Kale, she had been forced to eat as a child.

“No,” her mother said sharply, head jerking towards Terra. She took a slow breath and repeated the word more calmly, “no.”

“Is this why you asked me here?” Terra asked, rubbing her arms against the sudden chill, “another lecture on what I should be doing?”

“I want you to learn how to use this gift, you cannot wait until it passes to you to learn. If you will not let me train you, then there are several people that can help you.” Her mother’s voice was formal again; it was an order to an employee, not to her daughter.

Terra turned and walked out.

“Teresa Wilson,” her mother shouted after her. Not even using her married name, like her marriage, and her husband was yet another thing that was not acceptable.

Terra didn’t know why she’d agreed to come here. She’d known this was how it would go, how it always went really—or at least some variation of this. But part of her still hoped for a Mum, not a manager. Terra couldn’t even see the future yet, not while her mother was still alive. It passed from mother to daughter when the mother died.

The security guards said nothing as she passed, though she knew they would have heard everything. She felt their judgement on her back, but it didn’t make her stop.

Terra drew in the scent of clean water and pine trees, struggling to find calm after the fight with her mother. She lined up her camera as a small butterfly landed on a flower. Its dark-blue wings twitched in the breeze. Its beauty pulled at her; how it changed from the hairy worm where it started its life into this elegant beauty. So different.

She wished that she could share this with her mother, not the picture, but the passion she felt; the joy the photography gave her. But to her mother, it was only ever a waste of time. Especially when they all knew that Terra would eventually go blind when the visions passed to her. It never mattered the recognition she got when her photos were published or the pleasure she had in the work.

Terra quickly captured the shot as the butterfly finally stilled. The low autumn sunlight made it almost impossible to see the tiny screen on the camera. She would have to wait until later to see if the shot was what she’d been aiming for.

“I think so?” Terra said, attempting to smile at him as she tried to push thoughts of her mother away.

Jake sat at the base of a tree a short distance away, holding a book loosely in his hand. An easy smile played on his lips as he watched her. He had stayed with her, despite the quickly cooling weather, while she had taken photos for the past two hours. This was not their first trip to this small park, and she doubted it would be the last. His patience was one of the many reasons Terra loved him.

“That’s probably just as well. I suspect we haven’t got much time left before they make us leave?” Jake asked, laughing as he glanced up at the two bodyguards that watched them.

“An hour later than we should have already,” the larger of the two said, the severe tone broken by a quick grin.

“How does it look?” Jake asked as he stood, brushing off leaves as she got closer.

Terra started to answer, but the words slipped away as pain sliced through her head in a sharp wave. The camera fell from her hands; she tried to grab it, but her hand didn’t seem to want to move right.

Her chest felt too tight, stopping her from pulling in enough air. She felt herself stumble forward as her legs no longer wanted to work. Pain pounded through her head. Darkness crawled along the edge of her vision.

She saw Jake’s book fall, the worn dog-eared pages hitting the ground, landing in a pile of leaves. She fought her body to try to look up. To see her husband’s face; nothing worked.

Hands grabbed her, holding her; voices shouted. Her eyes burned; the colour turned to shadows that moved around her. She gasped in air, trying to force out just one word. She knew what the darkness meant.

“Mum.” Then everything went black.

A Note on previous versions

This Short Story was originally published in 2012 and was then heavily updated in 2020.

If you purchased the original Story and would like the updated version please email me via the contact form at the bottom of the web page with your receipt and I will send you the new version.